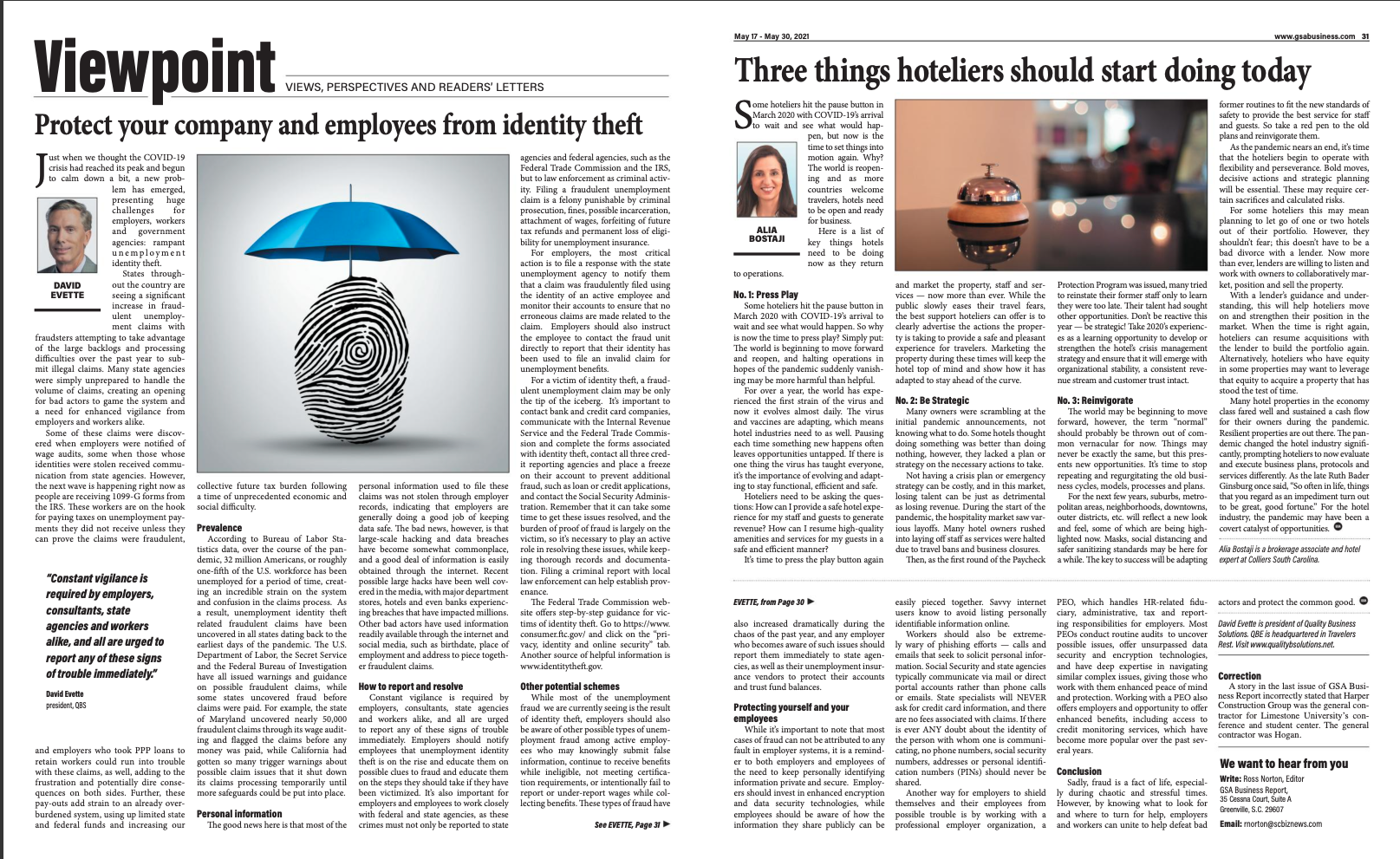 Click here for a PDF copy of the article.

Just when we thought the COVID-19 crisis had reached its peak and begun to calm down a bit, a new problem has emerged, presenting huge challenges for employers, workers and government agencies: rampant unemployment identity theft.

States throughout the country are seeing a significant increase in fraudulent unemployment claims with fraudsters attempting to take advantage of the large backlogs and processing difficulties over the past year to submit illegal claims. Many state agencies were simply unprepared to handle the volume of claims, creating an opening for bad actors to game the system and a need for enhanced vigilance from employers and workers alike.

Some of these claims were discovered when employers were notified of wage audits, some when those whose identities were stolen received communication from state agencies. However, the next wave is happening right now as people are receiving 1099-G forms from the IRS. These workers are on the hook for paying taxes on unemployment payments they did not receive unless they can prove the claims were fraudulent, and employers who took PPP loans to retain workers could run into trouble with these claims, as well, adding to the frustration and potentially dire consequences on both sides. Further, these pay-outs add strain to an already overburdened system, using up limited state and federal funds and increasing our collective future tax burden following a time of unprecedented economic and social difficulty.

According to Bureau of Labor Statistics data, over the course of the pandemic, 32 million Americans, or roughly one-fifth of the U.S. workforce has been unemployed for a period of time, creating an incredible strain on the system and confusion in the claims process.  As a result, unemployment identity theft related fraudulent claims have been uncovered in all states dating back to the earliest days of the pandemic. The U.S. Department of Labor, the Secret Service and the Federal Bureau of Investigation have all issued warnings and guidance on possible fraudulent claims, while some states uncovered fraud before claims were paid. For example, the State of Maryland uncovered nearly 50,000 fraudulent claims through its wage auditing and flagged the claims before any money was paid, while California had gotten so many trigger warnings about possible claim issues that it shut down its claims processing temporarily until more safeguards to prevent possible fraud could be put into place.

The good news here is that most of the personal information used to file these claims was not stolen through employer records, indicating that employers are generally doing a good job of keeping data safe. The bad news, however, is that large-scale hacking and data breaches have become somewhat commonplace, and a good deal of information is easily obtained through the internet. Recent possible large hacks have been well-covered in the media, with major department stores, hotels, and even banks experiencing breaches that have impacted millions. Other bad actors have used information readily available through the internet and social media, such as birthdate, place of employment and address to piece together fraudulent claims.

How to report and resolve

Constant vigilance is required by employers, consultants, state agencies and workers alike, and all are urged to report any of these signs of trouble immediately.  Employers should notify employees that unemployment identity theft is on the rise and educate them on possible clues to fraud and educate them on the steps they should take if they have been victimized.  It’s also important for employers and employees to work closely with federal and state agencies, as these crimes must not only be reported to state agencies and federal agencies, such as the Federal Trade Commission and the IRS, but to law enforcement as criminal activity. Filing a fraudulent unemployment claim is felony punishable by criminal prosecution, fines, possible incarceration, attachment of wages, forfeiting of future tax refunds and permanent loss of eligibility for unemployment insurance.

For employers, the most critical action is to file a response with the state unemployment agency to notify them that a claim was fraudulently filed using the identity of an active employee and monitor their accounts to ensure that no erroneous claims are made related to the claim.  Employers should also instruct the employee to contact the fraud unit directly to report that their identity has been used to file an invalid claim for unemployment benefits.

For a victim of identity theft, a fraudulent unemployment claim may be only the tip of the iceberg.  It’s important to contact bank and credit card companies, communicate with the Internal Revenue Service and the Federal Trade Commission and complete the forms associated with identity theft, contact all three credit reporting agencies and place a freeze on their account to prevent additional fraud, such as loan or credit applications, and contact the Social Security Administration. Remember that it can take some time to get these issues resolved, and the burden of proof of fraud is largely on the victim, so it’s necessary to play an active role in resolving these issues, while keeping thorough records and documentation. Filing a criminal report with local law enforcement can help establish provenance.

The Federal Trade Commission website offers step-by-step guidance for victims of identity theft. Go to https://www.consumer.ftc.gov/ and click on the “privacy, identity and online security” tab.  Another source of helpful information is www.identitytheft.gov.

While most of the unemployment fraud  we are currently seeing is the result of identity theft, employers should also be aware of other possible types of unemployment fraud among active employees who may knowingly submit false information, continue to receive benefits while ineligible, not meeting certification requirements, or intentionally fail to report or under-report wages while collecting benefits. These types of fraud have also increased dramatically during the chaos of the past year, and any employer who becomes aware of such issues should report them immediately to state agencies, as well as their unemployment insurance vendors to protect their accounts and trust fund balances.

Protecting yourself and your employees

While it’s important to note that most cases of fraud can not be attributed to any fault in employer systems, it is a reminder to both employers and employees of the need to keep personally identifying information private and secure.  Employers should invest in enhanced encryption and data security technologies, while employees should be aware of how the information they share publicly can be easily pieced together. Savvy internet users know not to avoid listing personally identifiable information online.

Workers should also be extremely wary of phishing efforts – calls and emails that seek to solicit personal information. Social Security and state agencies typically communicate via mail or direct portal accounts rather than phone calls or emails. State specialists will NEVER ask for credit card information, and there are no fees associated with claims.  If there is ever ANY doubt about the identity of the person with whom one is communicating, no phone numbers, social security numbers, addresses or personal identification numbers (PINs) should never be shared.

Another way for employers to shield themselves and their employees from possible trouble is by working with a professional employer organization (PEO), which handles HR-related fiduciary, administrative, tax, and reporting responsibilities for employers. Most PEOs conduct routine audits  to uncover possible issues, offer unsurpassed data security and encryption technologies, and have deep expertise in navigating similar complex issues, giving those who work with them enhanced peace of mind and protection.  Working with a PEO also offers employers and opportunity to offer enhanced benefits, including access to credit monitoring services, which have become more popular over the past several years.

Sadly, fraud is a fact of life, especially during chaotic and stressful times.  However, by knowing what to look for and where to turn for help, employers and workers can unite to help defeat bad actors and protect the common good. For resources to prevent identity theft, or if you or one of your employees has been the victim of fraud, contact QBS today and find out how our experts can help.